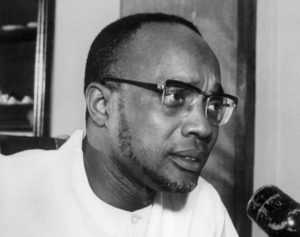 “Hide nothing from the masses of our people.

Tell no lies. Expose lies whenever they are told. Mask no difficulties, mistakes, failures.

"Another world is not only possible, she is on her way. On a quiet day I can hear her breathing."

Democracy is about much more than casting a vote every five years.

True democracy must include the democratization of the economy so that the people have economic justice.

True democracy can only be realized when the wealth and resources of Guyana benefit all Guyanese and not a wealthy minority.

The very electoral system we have inherited obstructs democracy.

To compete in the elections across the 10 regions of Guyana, contenders must have substantial financial resources.

The politicians from the two major parties and most of the new parties are connected in one way or another to the business/corporate elite, and big business funds all sides. So, whoever comes to power, repays those that funded them by awarding them big contracts and lucrative concessions. That is why, under both the PPP and APNU, the same people get richer and the poor get poorer.

And that is why it is difficult for an organization or party that genuinely stands with the poor and marginalized to take part in the elections.

We cannot ignore the class character and make up of the political parties. They are elites competing for a piece of the action and the new found oil wealth.

They appeal to us for our votes at election time, but inevitably after the elections they forget all the promises they made.

Instead, they  strengthen their class interests, feather their own nests, and serve the so-called ABC countries.

They call themselves patriots, while trampling on our God-given right to determine our own destiny.

That is why for OVP, elections are only one part of the struggle. OVP is more than an electoral outfit.

We were born to build the new nation of Guyana, a nation, which in the words of L.F.S. Burnham, must be "shorn of its colonial attitudes, its snobberies and prejudices, its discriminatory practices and its poverty".

We continue this struggle on the shoulders of our ancestors. 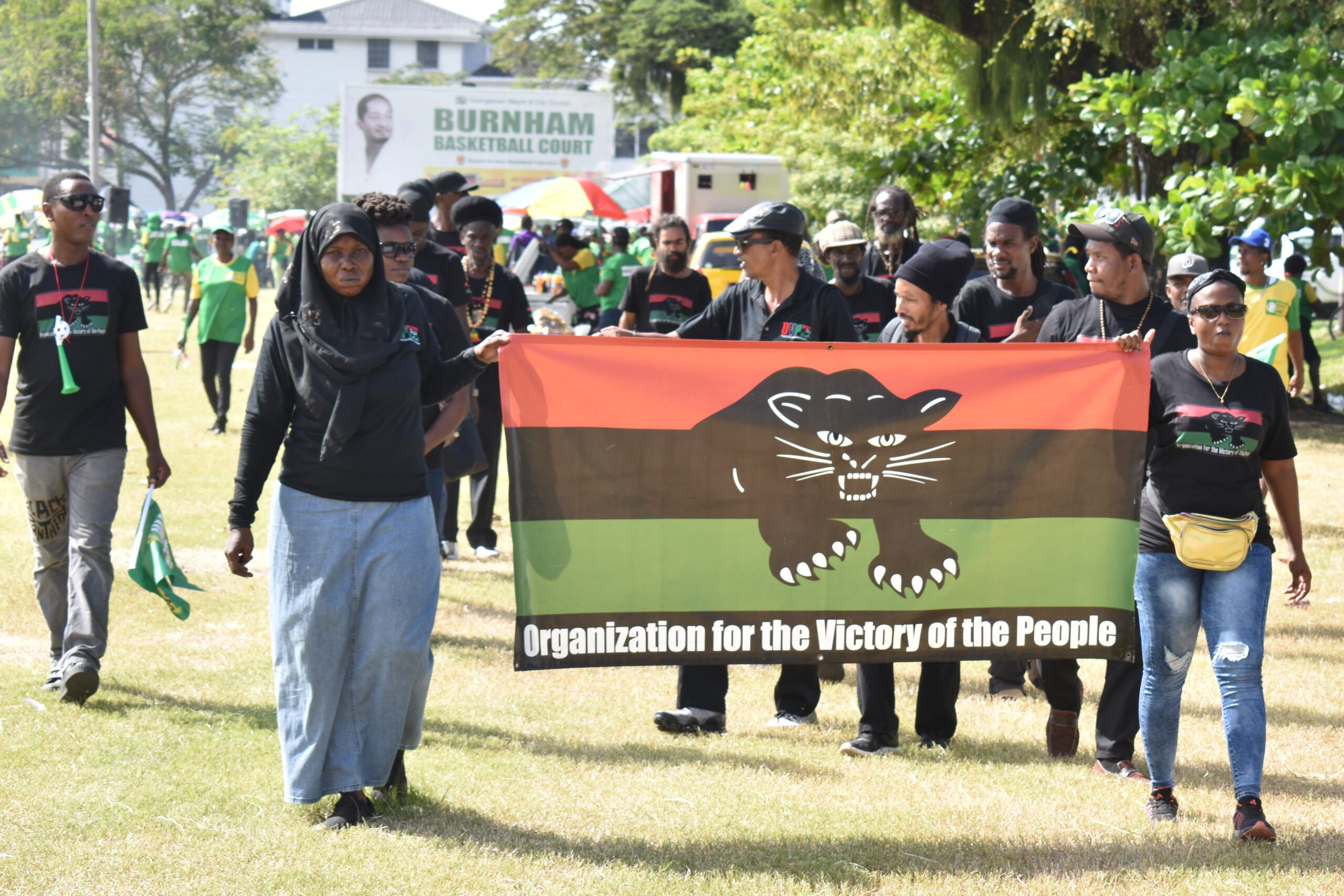 We dream of a truly independent, just and prosperous Guyana....

The question is, do we as a nation have the courage to realize the dream?

We knew that the PPP regime had become so corrupt and repressive that they had to be removed from office, and that APNU+AFC was the only political formation with the resources and support to unseat the PPP. The people were swept up in the nation-wide mood of hope and euphoria that existed in 2015 at the very thought of ending the long and unjust rule of the PPP.

WE KNEW IT WOULD BE AN EXCHANGE

Organization for the Victory of the People (OVP) did not share in the euphoria that was everywhere in the aftermath of the  2015 election results. We understood what many around us failed to understand, that is, the true nature and class character of the APNU+AFC coalition. At the time, some accused us of being pessimistic. Our aim was not to dampen the spirits of the people, we certainly did not want to rain on anyone’s parade. However, OVP is not in the business of telling people what they want to hear to win popularity or votes. We are committed to speaking the truth, no matter how bitter it is, and even if we lose support – so be it. Truth is the foundation of a principled politics that fosters genuine respect for the people. We would rather get 500 votes and tell the truth than 200,000 votes and lie to the people.

We were able to accurately predict the outcome we are faced with today because we knew that APNU+AFC’s failure to deliver real change was inevitable, precisely because of their bourgeois conception of politics. It is a politics that is elitist, unethical and that sees the masses of our people as mere numbers to be counted for electoral outcomes. Once they win the elections, the people, for whom they have little respect or meaningful connection with, are discarded, and their focus is solely on maintaining power at any cost. OVP never, at any time, equated the coalition with meaningful or radical change.

See below the advertisement that OVP placed in the Kaieteur News in the run up to the 2015 General and Regional Elections: 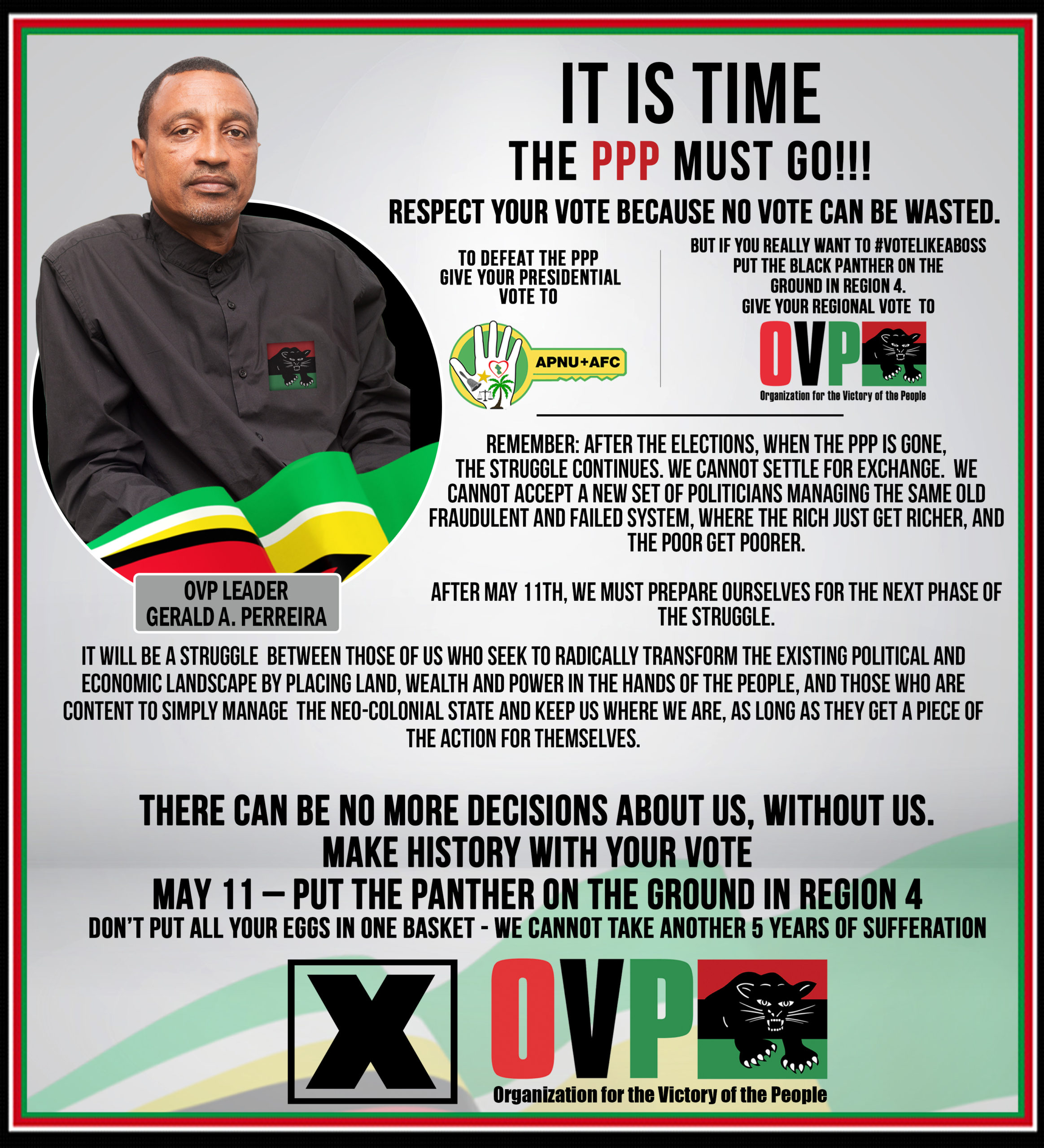 There can be no denying that everything OVP’s leader said in that ad  five years ago has come to pass.

WHAT IS DIFFERENT IN THE UPCOMING 2020 ELECTIONS?

APNU+AFC have created a breathing space for other elites to form new parties - at last count, 20 parties will be competing in the 2020 elections.

WHAT DO THEY ALL HAVE IN COMMON?

All of Guyana's political parties - old and new - are competing to manage the same failed system. PPP, APNU+AFC and all the new parties adhere to the same bankrupt neo-liberal economics and none of them have said a word about the external interference in our national affairs and the  trampling of our sovereignty by the so-called ABC countries. The neo-liberal model has devastated countries worldwide – both in the so-called Developed World and throughout the Global South. This arrangement ensures that more and more wealth and power is given to a minority (the 1%) while the majority (the 99%) become poorer by the day. The gap between the haves and have-nots continues to widen under this corrupt system, despite all the talk by politicians about poverty alleviation and eradication. These are empty election promises. None of the existing parties in Guyana – old or new - will deliver any real change to the poor and oppressed people of this land – the 99%.

Our Record Speaks for Itself…

As new parties spring up almost daily, the people are asking, where were these new self-proclaimed saviours when Phantom Death Squads were stalking this land? When the PPP was building an ethnocratic state and hundreds of African youth were executed, some in their yards and bed. Were any of these new leaders  on the frontlines with us? Were any of them present at the protests we called outside then President Jagdeo and Minister Ghajraj’s offices, demanding an end to the terror? They were not.

If OVP wins the Region 4 Democratic Council,  we pledge to:

POWER & WEALTH IN THE HANDS OF THE PEOPLE

LAND IS FREEDOM - LAND TO THE TILLER

SUPPORT FOR THE ARTS

SEND THEM A STRONG MESSAGE

WE ARE SICK AND TIRED OF THE CRUMBS OFF THEIR TABLE

WE WANT THE MEAL

VOTE OVP IN REGION 4 AND…
TAKE BACK YOUR LOCAL ECONOMY

TAKE BACK YOUR LOCAL CONTRACTS

TAKE BACK YOUR LAND

TAKE BACK YOUR SECURITY

UNLEASH THE BLACK PANTHER & MAKE HISTORY WITH YOUR VOTE 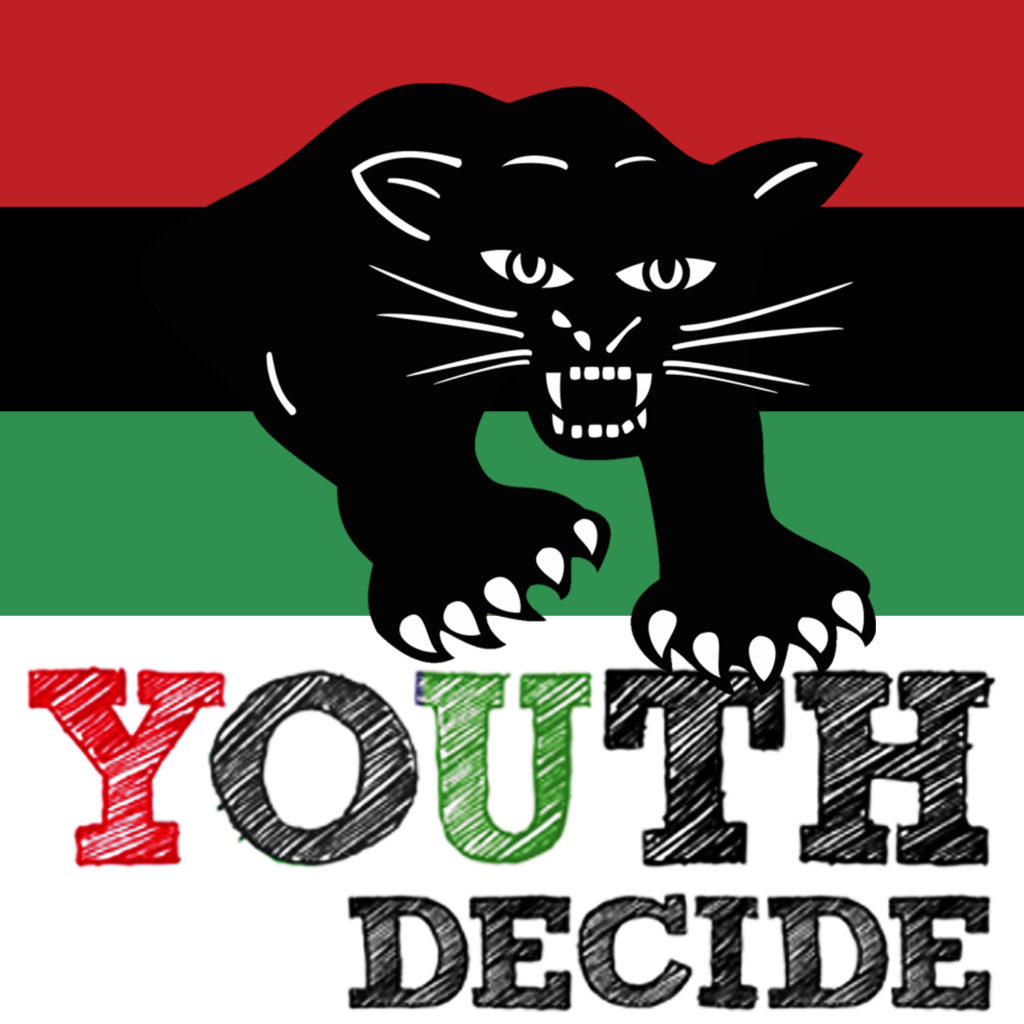 What is an Authentic Third Force

Over the years, and especially in the lead up to the 2020 general elections, political commentators have talked about the need for a ‘third force’ in Guyanese politics.

The ‘third force’ that we have heard so much about, is not a third political party with the same ideology as the other two dinosaurs, all competing to manage the same failed system. An authentic ‘third force’ must offer a revolutionary alternative that rejects both Market Fundamentalism (Neo-liberal Capitalism) and State Absolutism (Soviet-style Communism).

Any new party is a complete waste of time if that "third party" simply mimics the existing two parties, promoting neo-liberal economics and managing the captured state for external players.

This highlights the illusion of so-called liberal democracy. Whether we have two parties or one hundred parties makes little difference, if all they are doing is competing to see who can best manage the existing dysfunctional neo-colonial arrangement that imprisons us.

In such a “multi-party” scenario, when we go to the polls we are not able to vote for a different system – we are not able to vote for an end to neo-colonialism and the neo-liberal agenda that is strangling us. No, we are simply voting for a different manager of the same old tired system which is why, no matter who is elected, we see little or no change.

An authentic “Third Force" on Guyana's political landscape would mean a political formation that rejects the materialist and anti-spiritual ideologies of neo-liberal capitalism and Marxism.

The establishment of a 'Third Force' requires a formation with the political courage to advocate a different ideological position than the one that exists and dominates the political landscape currently.

Any party advocating the same ideology as the existing political parties cannot be described as a “third force”.

An authentic “third force” would unapologetically advocate for the poor and marginalized sectors of our society, rather than being an instrument of big business and imperial interests.

That is why Organization for the Victory of the People (OVP) can be said to be a genuine third force. Our ideology is different from all other existing political formations. We are a revolutionary democratic formation, born out of the fight for the rights of African people, and evolved into a force that advocates and fights for the human rights and dignity of all of Guyana’s oppressed and exploited masses, irrespective of their race.

The People’s National Congress (PNC), has historically enjoyed the African vote, but did nothing of significance to empower Africans, except for the period 1970 – 1985  under the revolutionary and visionary leadership of Forbes Burnham. Following Burnham’s death, the right wing elements in the party took control, renaming the party PNCR – the R standing for Reform – some say deformed!

The liberation of African Guyanese can never be realized under the present day middle-class Anglophiles that currently constitute the leadership of the PNCR. They are not up to the task of initiating radical and revolutionary transformation that would put political and economic power in the hands of the people.

Likewise, the People’s Progressive Party (PPP), has historically enjoyed the Indian vote, while in fact, after decades of political power they only ever empowered a minority of wealthy Indians, while the vast majority of Indians remain in poverty. They too changed their name along the way to PPP/C – the C standing for Civic, a reference to a mythical engagement with civic society.

Come 2020, Guyanese, especially the youth, irrespective of their race, need to take a bold step for real liberation and identify with the Panther. This would give a rude awakening to all those political formations who have taken the Guyanese people for granted for so long.

If we were to have the opportunity to form the entire regional council in Region 4, the most populated and strategic region in Guyana, we pledge to work tirelessly to uplift not only poor and struggling Africans, but all oppressed and marginalized citizens in Region 4, regardless of race.

Every Guyanese must prosper under the banner of the Panther because our ideology demands nothing less. When we achieve a Guyana based on justice for all, we will have truly established a ‘third force’ - a genuine alternative to the two or one hundred parties that advocate an ideology that can, by its very definition, never deliver justice.